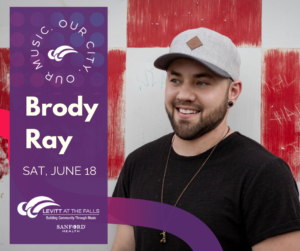 In 2018, Brody Ray auditioned for America’s Got Talent. The Kearney, NE native sang Jordan Smith’s “Stand in the Light” and explained to the judges that the lyrics mirrored his own life. Elaborating on his “struggles and battles,” Ray explained, “I actually was born female. I’m transgender.” Ray’s stunning performance inspired the judges and a nation-wide audience alike, who gave him both a standing ovation and a unanimous vote to continue in the competition. Since that inspiring launch, Brody has been traveling all over the US and Canada singing at some of the nation’s largest Pride Festivals. The Nashville recording artist has released an EP, Detour, as well as several singles that have a new alternative rock and pop country sound that’s full of life and energy. Brody regularly speaks, advocates and educates for the LGBTQ+ community.