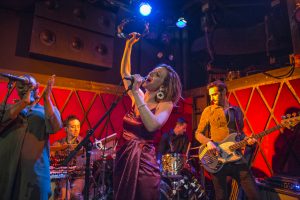 Eleanor Dubinsky has found the tender edge where jazz, world, and pop sensibilities meet emotionally forthright songwriting. Composing in English, French and Spanish, the indie songstress is noted for her soothing, sultry vocals, enlivened by Latin, Brazilian, American and West African rhythms. Accolades include being named “Best Up and Coming Francophone Singer in NYC” by French Culture Guides and winning the Sennheiser recording contest at the 2012 ASCAP EXPO with her song “Wait For You”. Eleanor’s music has been featured on MTV, Lifetime and Animal Planet, ads for American Express, radio stations throughout Mexico, and NPR’s Alt Latino. Dubinsky creates “music that grabs you by the soul.” eleanordubinsky.com