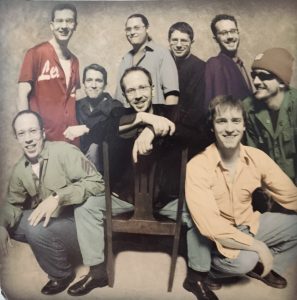 Spooncat! was formed in 1996 in Dell Rapids, South Dakota, the brainchild of brothers Jeremy, Jason, and Jonathon Hegg, and lifelong friend Christopher Smith. Widely acclaimed for their original horn-driven songs, the band played throughout the Midwest for years, with performances stretching from Utah to Arkansas. Spooncat! has recorded five albums of original music: Navigate The Fabulous (1998), The American Jiggler (2000), Live Animals (2003), Tao Babies (2004), and Higher Than The State (2008). Now, more than twenty years after their first gig, Spooncat! maintains an active performance schedule featuring all nine of the original band members.