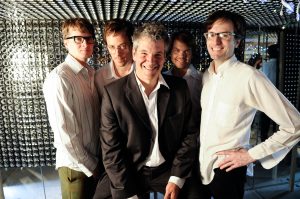 John Munson and Matt Wilson grew up on opposite sides of Minnesota’s Twin Cities. But the two came together as teenagers in a rock band, and they’ve been drawn to one another, both as friends and musicians, ever since. These powerhouse musicians have made up notable regional groups Trip Shakespeare, Semisonic, and the New Standards. John and Matt are joined by a band full of musical heavyweights including Dave Salmela on keyboards, Steve Roehm on guitar, rhythm savant Richard Medek on drums, and Minneapolis punk rock producer Jacques Wait on lead guitar. The Twilight Hours’ sound is a sort of rock that defies easy categorization. The music ranges in mood from subtle to soaring, but the band’s rangy melodies and energetic performances are always full of art and joy. thetwilighthours.com