The community has embraced the St. Patrick’s Day Parade and made it a tradition for those with Irish heritage and the Irish-at-heart, for the past 40 years. Here are 10 things you need to know about St. Patrick’s Day in downtown Sioux Falls! 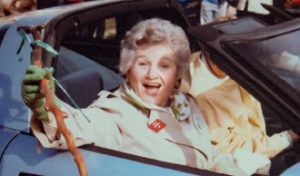 In 1979, the city’s matriarch Sylvia Henkin called a group of friends around her kitchen table to discuss her idea to bring a “people’s parade” to celebrate the Irish spirit in Sioux Falls. As with most things that Sylvia set her mind to, the idea quickly turned to reality. The first parade was held in 1980 in downtown Sioux Falls, and the tradition has never wavered. Take part in the city’s longest running parade and celebrate Sylvia’s legacy during the 40th Annual St. Patrick’s Day parade on March 16, 2019, starting at 2:00pm in downtown Sioux Falls. Click here for a parade map.

2. The Falls will be lit green.

Visit the city’s namesake while it’s lit green for the holiday! Falls Park Visitor Center will be open St. Patty’s Day weekend, 10:00am – 5:00pm on Saturday and Sunday. 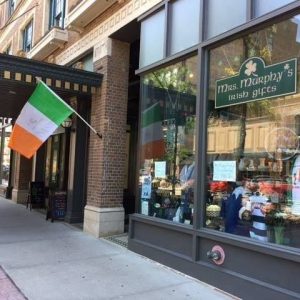 3. Mrs. Murphy’s is the only Irish store in South Dakota.

For over 20 years, Mrs. Murphy’s Irish Gifts has been a must-see shop, selling the finest jewelry, clothing, food and gifts imported from Ireland, right here in downtown Sioux Falls.

Parade founder Sylvia Henkin invited the drum group to the event in its inaugural year, and they’ve returned every year since. Here’s a sneak peek of what you can expect!

The Celtic Steps School of Irish Dance is a growing community in Sioux Falls. Seriously, two dancers went to Scotland for the World Irish Dancing Championships.  See the group dance a jig at the St. Patrick’s Day Holiday Inn party,following the parade.

Hugh Grogan has strong Irish connections and serves as an advocate in the Sioux Falls area.  The Grogans celebrate by making a family float for the parade every year. Learn more about Grogan here.

Official buttons are not only a festive accessory, but also serve as the annual St. Patrick’s Day fundraiser.  Over $160,000 has been raised for local nonprofits from button sales. Get yours at the Sioux Falls Chamber of Commerce or Mrs. Murphy’s Irish Store for just $3.

Every downtown St. Patrick’s Day celebration kicks off with the painting of a shamrock in the middle of historic Phillips Avenue. Beginning at 11:00am, the corner of 9th and Phillips Avenue will be covered with the classic Irish symbol.

9. Listen to traditional Irish music at the Old Courthouse Museum.

Enjoy the Dakota District Pipes & Drums and Maggie in the Meantime with food and drinks during the St. Patrick’s Celebration of Traditional Irish Music at the Old Courthouse Museum.

10 . Eat, drink and be merry at DTSF’s authentic Irish Pub.

Feast on traditional bangers and mash with a tall Guinness at Blarney Stone Pub, downtown’s only Irish pub. There will be a number of food and drink specials during the day, as well as one of the best patios in the area. Find a full list of restaurants and bars under the Dine & Drink section.

Find all downtown happenings in our Events calendar. Parking in downtown is free on weekends and the public is encouraged to make arrangements for safe transportation through Lyft & local cab companies.